After a long stretch of visitors its been the 3 of us here for a few weeks before the christmas entourage arrive. We thoroughly love having people here to stay and its great we get to share a slice of our time here with people, but its also nice to have some time together as a family and fully relax into a routine again.

I’ve been asked recently by lots of friends and family what our daily life/routine is like here in Sri Lanka, so here’s an idea of what we get up to…

Routine here means being woken around 6am by a little face next to our bed shouting ‘nana nana’ holding the banana which I left on his bed in the hope that it would give us an extra 10 minutes of sleep. But for him its too exciting and he just HAS to share the news of the magically appearing banana. So up I get, blurry eyed, to share the excitement. The weetabix (or weetbix as its known in Australia) that Uncle Alex brought over with him has now run out so I do my best to persuade him that cornflakes are equally as tasty, and he eats them half heartedly. Peanut butter on toast is also on the menu, or just peanut butter straight from the jar if he manages to get his hands on it. Banana smoothies are also a hit of course, and we add lots of oats and sometimes avocado. On a week day I pack his bag for nursery, get him dressed, and wrestle with him to get sun cream on before heading off in the tuk tuk for drop off by 8am.

Ian normally then goes for a surf and I go to yoga either close by, which means I get back to the villa for a chill out before pick up, or in Weligama about 15 minutes away at Hangtime hostel which is usually followed by a cup of tea at their roof top cafe, I look across at the ocean whilst catching up on some social media or write my blog. I watch the surfers thinking I should probably grab a board and try surfing myself but by now it’s nearly time to head back to Ahangama to pick Rocky up. However, we’ve recently extended his nursery hours a couple of times a week so that should mean I have more time to surf. I’ve been a couple of times now and really enjoyed it.

Ian quite often meets me after yoga for a coffee, and then we might head out on the scooter to find somewhere for lunch. Then once we pick Rocky up it’s hit or miss as to whether he naps these days, we’re coming to terms with the fact that he has dropped his day time nap as it just makes putting him to bed in the evening so much harder. We’ve connected with a great group of other parents here on the south coast, we each take it in turns to host each Tuesday afternoon or find a shady beach spot. One week Freedom Surf School hosted and we took the kids out for a surf, Rocky wasn’t quite sure, he’s probably a little young, but it was great to put him on a board and introduce him to the waves. The instructors there work with all ages and were great with the kids. This week we headed to Mauvies Bar for pizza making! It goes without saying that Rocky enjoyed this one.

There’s some beautiful lagoons along the coastline, rock formations create safety from the surf and stunning swimming pools perfect for kids. Rocky has been testing out his new snorkel and mask and just loves looking under the water at the fish and coral. The beaches here are coming to life now that high season has arrived, which also means its busier with tourists but its still not crowded or unpleasant. Theres a great beach bar at our local beach which is perfect for sunset beers and a dip in the ocean. 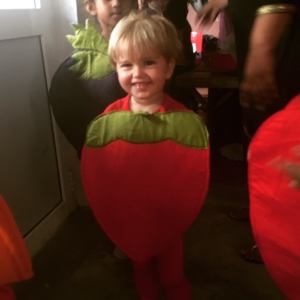 Rocky recently took part in the end of year concert at his nursery ‘Bluebell International Preschool’. They’ve been hard at work practising for the last month so we were looking forward to seeing him in action. The whole production was amazing we had no idea how much hard work had been going on behind the scenes. Rocky was a chipmunk to start with and wasn’t quite into it, he stood on the stage with the other two toddlers in his group and looked into the audience completely bewildered, his friend Sanu (our lovely nannies son) came on stage to help him and give him encouragement. The second song he took part in he played a strawberry and this time he got a little more into it following the older kids lead. By the third song, ‘Baby Shark’, he had obviously found some confidence from somewhere and was the only one doing the actions and attempting the dance moves. Proud mum and dad moment.

Sadly, we had to say goodbye to our wonderful babysitter who has moved on to follow her dreams and make a better life for her and her son, Rocky adored her and we will miss her lots. Thank you Janu for everything! 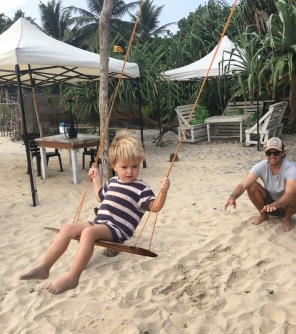 So other than that we’re really enjoying just hanging out and relaxing, either in the pool at the villa or out and about, exploring our surroundings and hanging out with new friends. I can’t believe we only have 6 weeks left here before moving on to our next adventure. We’re already talking about coming back to Sri Lanka, the more time we spend here the more we fall in love with it.