Travelling days, even if we’re only moving 8 kms away, are always a big effort. We

have with us two suitcases, a travel cot (the very compact Baby Bjorn), a stroller (the very compact yo-yo), a car seat, and a surf board bag. We don’t travel light. We arranged for a jeep to pick us up at midday and take us and our things to our new accommodation at Whiskey Point. But when the jeep driver decided he didn’t want to drive across the beach, he took it upon himself to just leave. I wish i’d taken a photo of the four guys who helped us across the beach with all our luggage but i had a toddler in one hand and a backpack in the other… one of the guys had my huge 30kg suitcase on his shoulder! We piled all our luggage into 2 tuk tuks and headed off to our new place.

We stayed at Riva Del Sole which is a 3 minute (make that 20 minutes with a toddler) walk to the beach, our accommodation was basic but all clean and new as it was only a month old. We found out that afternoon that there’s a big all night party at Whiskey Point every Friday night. The duff duff of the party kept Ian up most of the night and consequently I didn’t sleep much either. Rocky, of course, slept through the whole thing. However, he is waking at 5.30am every morning at the moment so we were up and about for the sunrise..!

We spent the next 10 days at Whiskey Point, with a little over night trip to nearby Lighthouse Point the following Friday night to escape the party. We visited Pottuvil town for groceries and Rocky is once again immersed in sensory overload and bucket loads of attention from the locals. We strolled through a fish market where a huge Marlin lay on the floor, we bought rotti filled with coconut sambal for 10LKR (about 7AUDcents), and we escaped the heat in a small air-conditioned supermarket. We jumped back in a tuk tuk and dodged cows and goats on the ride home, back to our air-conditioned cabana for family nap time.
Theres not much at Whiskey Point but there are a couple of small resorts with nice pools, so for a small fee we went to hang by the pool for the afternoon. During the 10 days Ian would surf and I would get a tuk tuk with Rocky into Arugam Bay to take him to the nursery, then I’d do a yoga class and maybe have a swim at the beach before picking him up and taking him back to whiskey point. Then we’d all spend the afternoon together either on the beach or at one or the resort pools, we even found a resort run by an Italian family who made the best pizzas! It was a great time of day watching the sun go down with beers and pizza by the pool. One day we all headed to Arugam Bay and Ian gave me a surf lesson, and I actually caught waves (insert some kind of radical emoji). 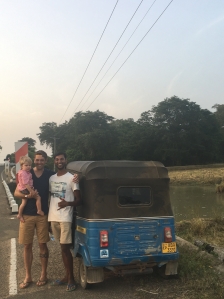 Once the weekend arrived we decided to go on a tuk tuk safari. Basically our tuk tuk driver, Gayan, who we’ve been using pretty much the whole time we’ve been here, drove us south of Aragum Bay and then inland about 12kms. We weren’t sure if we’d see much, Gayan told us that he probably only sees elephants twenty percent of the time but that we would definitely see monkeys, crocodiles and buffalo. Turns out we saw all that AND elephants. It was a great afternoon and Rocky was absolutely loving it. Gayan urged us not to get too close to the elephants (we were probably about 40 metres away)
and he even had fireworks in the tuk tuk to scare them away if they started to charge! We saw hundreds of monkeys, they were everywhere, in trees, the side of the dirt road, and leaping and springing alongside the tuk tuk, they were definitely my favourite, and Rockys too I think.

This probably all sounds wonderful, and it is don’t get me wrong, but when travelling, especially with a toddler, things don’t always go to plan. Ian and I have been trying to plan things as we go along and it was our intention to get to Sri Lanka and find a little house or villa where we could settle for a while. Moving from place to place isn’t ideal with a 2 year old and we’ve all been in one room for 3 weeks now which is taking its toll on all of us, especially with the 5.30am wake ups. We need more space, a kitchen so we’re not eating out 3 times a day, and 2 bedrooms! But that’s just not been available to us yet, only expensive double rooms which would be ok for 2 weeks but not when we’re away for a year. So we decided to head north and see whether there were more options in less touristy areas. We left a full suitcase and the stroller at our accomodation in Whiskey Point in order to lighten our load and took a 3 hour minivan ride to Kalkudah. The plan was to spend 4 nights there to break up the journey to Uppuveli which was another 4 hours from there. So I got online and searched and searched for some cheap but nice accommodation. What you get for $120+ a night is a stunning resort on the beach but it’s hard to find something nice for $40-$50 a night.

Anyway, I found a hotel that was right on the beach, looked nice, clean, and fairly modern. Well, our mouths nearly hit the floor when we arrived, and if you’ve seen the pic on my instagram page you’ll know why. It looked like a 2 storey building with a third floor, or at least a concrete slab, being held up by hundreds of bamboo sticks….basically a building site above the hotel. To be fair, once inside (where you couldnt see the unfinished mess) it wasn’t too bad. The affects of the tsunami are still very apparent and everything is made out of concrete, even the swankier hotel next door had concrete pillars and the pool bar looked like a concrete bunker.

It wasn’t just the hotel, Kalkudah itself was a long stretch of beach and there was no sign of any surf. There was no village just big new resorts, another affect of the tsunami. So we cut our 4 nights to 2 and decided that it might be better to head south where we knew there would be surf and a bit more going on. There are apparently a lot more villas and houses to rent too which would suit us better. So after 2 nights it was back in a minivan to Arugam Bay. We decided that it would be best if Ian did a solo trip to the south coast for a few days to check out some areas and find us a place to settle whilst Rocky and I stayed here where we have access to the local nursery school. We’ll find our feet one of these days but for now it’s trial and error. At least we have great food, great weather, and each other to pick us up when things aren’t going right.

3 thoughts on “Ups and downs on Sri Lankas East Coast”