Needless to say this trip has been a long time coming and a lot of work has gone in to organising everything… packing up the house, arranging bank accounts and insurances, storing the cars, along with a long list of other things. So when we finally checked in at Brisbane airport and got ourselves through security we sat down at the bar. Ian ordered a bottle of champagne, we sat Rocky in a high chair where he could watch the planes, and we took a big sigh of relief that we were finally on our way. Cheers to that.

The 9 hour flight to Bangkok was never going to be a breeze with a toddler, we had the colouring books, the sticker books, paint with water books, the toy car, and the iPad complete with toddler learning apps, and of course the seats tv screen, but once all of that was exhausted it was time to get the over-tired toddler to sleep. He didn’t agree. He thought being on a plane was great fun and despite being a great sleeper normally, it took ‘the daddy hold down’ to get him to sleep, something which we have found on a plane to be the only way of getting him to crash (probably the wrong word to use whilst being on a plane but you know what i mean). Ian took him for a walk basically cradling him and giving him a hug which he couldn’t get out of. Rocky crashed within about 3 minutes…

We had the yo-yo stroller with us which I can’t recommend enough for travel, he sat in it quite happily during the 2 hour transit in Bangkok, and even laid down quietly and watched Ian and I get a 30 minute foot massage each… winner. The fact he only slept about 3 hours on the flight paid off! He fell asleep voluntarily on the 3.5 hour flight to Sri Lanka (Colombo), and I managed to get about an hours sleep myself. We arrived in Colombo at midnight so didn’t get to our hotel till around 2.30am local time. Luckily Rocky went straight to sleep, I was so worried that he wouldn’t seeing as that was 6.30am Australian time, his usual wake up time. We all woke around 8am the next morning, still pretty exhausted. The buffet breakfast went down very well. We were in a little bit of a western bubble in our hotel to be honest, I was looking forward to getting in a tuk tuk on the crazy streets below… 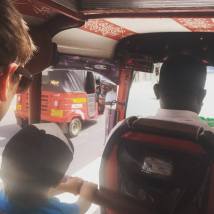 That afternoon, following a short family nap time, we decided to take a tuk tuk to Pettah, one of the oldest districts. Riding in a tuk tuk in itself is a great experience, and although Rocky seemed unsure when the buses and other tuk tuks went past us beeping their horns as they do, he was definitely enjoying himself. There are no traffic lights or any particular road rules really… they just go, and beep their horns, and keep going, how they’re not driving round with dents all over them is a miracle.

Pettah was crazy, so busy and bustling, we were on foot now and took a side street to 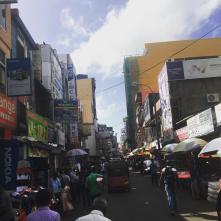 find some calm. We bought some bombay mix from one of the many street stalls and if you’d have wanted a spare part for a blender, a kids toy, a packet of super glue, or some fruit then you’d be in luck because someone would’ve offered you some. Rocky was experiencing sensory overload and loving every minute.

It was stinking hot. Ian and I needed a cool down in the form of Sri Lankas Lion Lager which we were yet to sample. we eventually found a bar that was open, above the street and occupied by some locals, a chance to refresh and recharge before our tuk tuk ride back to the hotels aircon. The lager didn’t disappoint, and its a good job because when we asked for 2 bottles we got 2 giant 675ml bottles…they hit the spot. Now we were in Sri Lanka. 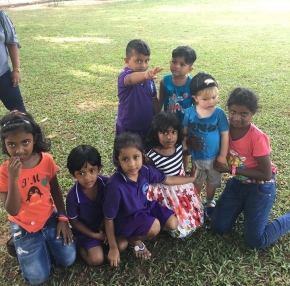 We stopped at the local park on the way back, a large grassy area with tree lined paths running through it and a play park in one corner, it was full of kids who had obviously just finished school for the day and Rocky had a great time climbing through the tunnels and going down the slides. Other kids helped him climb the tricky parts and parents took photos of him with their kids…rocky the rockstar.

Still exhausted, we had an early night as we knew tomorrow was going to be tough…. we had to go to the Department of Immigration to extend our 1 month tourist visa to 3 months, a process which we’d been told could take at least 4 hours. I won’t bore you with the whole process but it took 2 hours once we got there which wasn’t bad and we got the visas extended which was even better! Ian tried his hardest to Jedi mind trick the immigration officer into extending it to 6 months, only to be told we have to show good behaviour in their country and come back in 3 months to get another 3 months. So fingers crossed Ian and Rocky behave themselves. 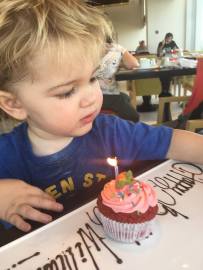 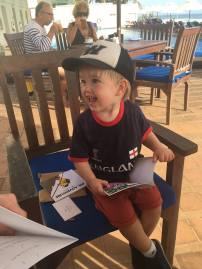 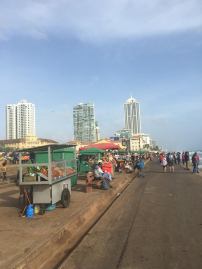 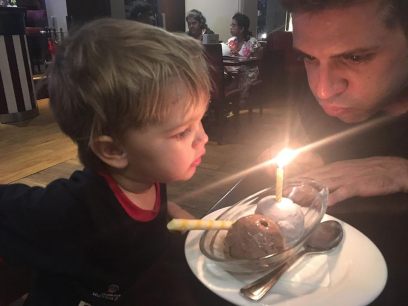 Rocky decided he was going to make the most out of his birthday and woke at 4am. The hotel staff bought over cake with candles and sang happy birthday. I don’t think he had a clue what was going on! We spent the morning at the park seeing as he’d enjoyed it so much the day before, then headed back crossing our fingers that he would have a big nap. He did. 3.5 hours, which gave us the chance to catch up on some sleep too. That afternoon we caught a tuk tuk to the famous Galle Face hotel and had a cocktail while Rocky opened his birthday present from his Grandma (thanks Grandma!). We then wondered along Galle Face Green, a family friendly park area along the coastline where people flew kites and ate food from the many food vendors. Another happy birthday song and ice cream from the staff at the restaurant, and still he has no clue its his birthday..! Then back to the hotel on another tuk tuk ready for an early start for our long 8 hour journey to Arugam Bay… our paradise is getting closer..

4 thoughts on “Our first few days in Sri Lanka”